skip to main | skip to sidebar


We check out of our Ellis Beach Bungalow and stop just across the road for “breaky,” pronounced breckie – Aussie slang for breakfast. I go for a special treat: baked beans on toast. Try it some time. Warm up a can of beans (plain, not with barbecue or bacon or detectable flavoring) and dump it on your toast and you can take credit for an Aussie breakfast. Nearly raw eggs, sunny side up, are an Aussie breaky tradition, too, but I got to where I skipped those, and I like eggs with some run to them).

From Ellis Beach we drive just over an hour north, first winding along the coast, then easier driving through an area of sugar cane fields. We find Dan and then head down river on his boat to pick up a couple from Santa Cruz, CA. Janelle is a botanist; her husband, Max, works in Silicon Valley (or has worked, we’re not sure). (Maureen told me that if you want to remember a name, you have to use it, so I just did.) Dan had planned not to take any customers this day, but these folks had only this day available and a real, professional interest in learning about the plant and animal life on the Daintree. Their interests helped expand our horizons so we were glad they were along.

Speaking of passengers, Dan told us later that Jane Fonda had been on his boat, and Neil Simon, and Robert Reich, Secy. of Labor under Bill Clinton. Said Jane was somewhat preoccupied with her grandchildren on the trip with her.
He likes trips with people who have questions and interests, vs. those who just sit there, though he's been surprised by big tips from folks who just sat during the whole tour. A few years ago he was "found" by the Frommer's folks, who gave him an enthusiastic write-up, and that plug has been good for the quantity and quality of his business. Also, his boat doesn't have a canopy, so he can get closer to the banks and go further up side creeks. He now just runs a single 10-seat boat, also good for maneuverability and personal interactions. Previously he had three boats and an assistant for handling tour-bus sorts of loads. (I think I've become his PR agent.)

Dan worked for years in Melbourne (on the south coast of Australia), doing biological research at Monash U, but knew he wanted to move to the tropics – get away from Melbourne’s chilly, drizzly weather. He vacationed here in upper Queensland for three years and then, just by luck, fourteen years ago on his way to look at some property, met a guy who had a tour-boat business and house to sell. Dan’s easily made the transition from researcher and lab administrator to river rat (that’s meant complimentarily) and tour guide.

Here’s Dan, in his office. He would have fit in among Captain Cook’s crew. A little history. Captain Cook did not discover the Daintree River as he sailed up the east coast – its mouth is not at all apparent from off the coast. Gold discovered in the mountains inland from here in 1873 led to a search for a port and the river’s discovery a century after Cook's voyage. (Along this line, just before our trip I came across a current Aussie newspaper article on a virtually unknown river way out in the Outback. Bryson, in Sunburned Country, remarked on the “unknowness” of Australia even after 200 years of settlement. There are so many places you just wouldn’t want to go to and people don’t.)

Mangroves, the main theme of our tour, are amazing trees, the way they have adapted to their various environmental challenges. I probably don’t have these numbers right, but there are 51 mangrove species worldwide and 39 of them are along the Daintree. That’s why it is a world heritage site. (For a scientific discussion, may I suggest Google and Wikipedia. I started off asking Dan a question that confused mangroves with mangoes! Not the way to get the respect of a biologist and a botanist.)
Mangroves are inundated twice a day by salt water. They cope with all this environment through extensive above-ground root systems. Dan, of course, knows his flora and fauna. He can spot a small cluster of orchids high in a tree, instantly identify high-flying birds, and find crocodiles. We saw three crocs. These are the salt-water variety. A small one was swimming with just his eyes visible and submerged quickly (they can submerge 2-3 hours) as we went by. One big guy we saw was sliding into the water as we approached. Then, there was this big guy sunning on the bank. We obviously did not bother him at all. I should have zoomed in so you would think we were in danger, but that would be wrong. We first worked our way down the river to its mouth. Dan said this was his favorite spot on the river – liked to come down here by himself, with a fishing pole and refreshments, and spend most of the day. I claimed its appeal was the flat horizon – reminiscent of our part of Oklahoma. Then we went up river quite a ways, about as far as low tide would permit, skirting around islands and up side creeks. After about four hours on the river we all went to lunch at the crossroads café. Dick and I then followed Dan as he dropped his paying customers off and went to his house. Nice spot back in the rain forest with a cabin that fits the environment. He fed his pet bird and we had a good visit, mostly catching up on classmates. Dan has more email contact with them than I do, but I'm the first classmate to visit him in Australia. We decided to get serious on a 50th reunion in 2010. In Dan’s annual, I wrote that I looked forward to taking my children to him when he became a vet, which was then his ambition. Pretty sharp HS humor, don’t you think? Then it was back to the crossroads café and bar for dinner. Again, this is the sort of place you expect to see Humphrey Bogart and Lauren Bacall. Dark barroom, with a bit of a rough feel, antique stuff hanging around, and a resident tree frog on the light fixture over the bar. I said he, the frog, probably feeds on barflies, doesn’t he – more great HS humor.

After a memorable day with Dan and his river we drove back to Cairns, found our motel and dropped off the rental car. Next up: Tilt Train to Brisbane, flight to Sydney. Dick and Rob, two gentlemen "pensioners," from Albuquerque, report on their September, 2007 trip to Australia. The itinerary. 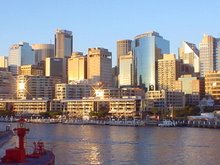